To snippet or not to snippet?

There’s been a lot of agency chatter this week after recent statistics from Similarweb claimed that 0-click searches are on the rise. The latest stat shared, between January and December 2020, claims that as many as 65% of searches resulted in a user not clicking through to the originator website. Naturally, everyone has an opinion; so here at performance.io, we wanted to give ours — and address questions around whether you should be embracing, or avoiding, featured snippets as part of your site’s SEO strategy.

A very brief history of the ‘featured snippet’

Featured snippets, quick answer boxes, position zero… You can call them what you like, but they’ve been part of search results dating back as early as 2014. We all remember the influx of blog posts and articles online about ‘how to optimise for featured snippets’, and Brighton SEO covered featured snippets and voice search as the major updates to the SEO industry for what felt like forever.

Of course, we all understood the mayhem featured snippets brought, and why every site owner wanted to appear for them. Ultimately, they brought a new highly coveted space at the very top of search results.

Last year, there was another significant change made to featured snippets. Previously, Google had allowed a site owner to feature in the coveted position 0 at the top of the search result, and also within the organic listings. However, a change was observed around the end of January 2020 that ceased this additional organic listing, and we’ll cover some of the initial reactions to that later on below.

A lot of recent news is saying that no one really clicks through on featured snippets. Is this true? OK, we can’t give a broad catch-all statement here, but performance.io has seen significant organic traffic peaks and troughs that all correlate to increases and decreases of featured snippets being served for the pages in question — which suggests, yes.

That said, it depends on the intent of the search, and the quality of the featured snippet, so it’s not always easy to guarantee driving traffic via generating featured snippets. At least, not without having evaluated the user intent and the search result first.

To give context to this, a user searching for ‘how to find featured snippets’ in Google gets the following result:

As you can see, clearly showing a short, effective summary in the snippet gives users very little reason or need to click through.

However, a user searching for ‘types of featured snippets’ gets this following result: 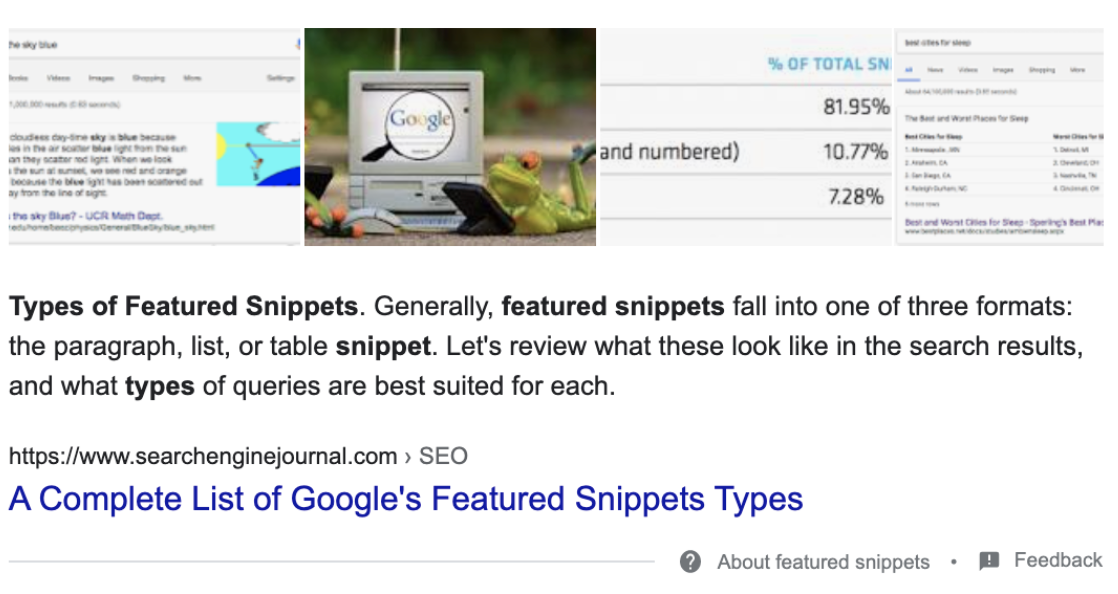 The screenshot above shows a summary of text but also with images included. These are hard to see as thumbnails and the ‘let’s review what these look like’ in the summary of text would then make it likely that users would want to click through to the page to get more detail.

Therefore, it cannot be conclusive to simply say featured snippets drive traffic or not, as a blanket rule across the board. What would be more effective is to evaluate the types of featured snippets and the user intent of the actual query.

But if a featured snippet is available, surely we should go for it?

Not necessarily. When the de-duplicating of featured snippets update was rolled out last January, it was only possible to appear in the featured snippet only, and not in the organic listing as well. A lot of site owners wanted help in under-optimising for featured snippets, because the one being served wasn’t high-quality or enticing users to click. This de-optimisation is quite easy to implement on-site by use of the no snippet meta tag.

Ultimately, it all comes down to evaluation and objectives. If there’s a snippet available for a search highly relevant to your brand, and one of your site’s core objectives is to raise brand awareness, then it’s a no brainer. Unfortunately, there is no real way to tell if a specific featured snippet drives traffic unless a site owner has driven traffic pre- and post–achieving the featured snippet, to compare the results. Overall, it can be easy to get caught up in optimising for featured snippets, but we strongly recommend that the key to success is, instead, focusing on creating high-quality content that helps benefit users.

What will happen with featured snippets and passage ranking?

We first heard the words ‘passage rank indexing’ from Google towards the end of 2020, and there were many in the industry that wanted to understand if this meant Google would only start indexing parts of content. A plausible consideration given the ever-increasing scale of the web, and the resource implications it has on Googlebot crawling and indexing billions of pages.

This then changed, and was termed ‘passage ranking’. Google confirmed that all web content would still be indexed as normal, but it was a ranking change and would benefit users in helping extract specific answers to their queries in long-form content — and surface them in search results.

The image below shows this, and I think we can all agree it’s difficult to differentiate a significant variance between the two aesthetically. 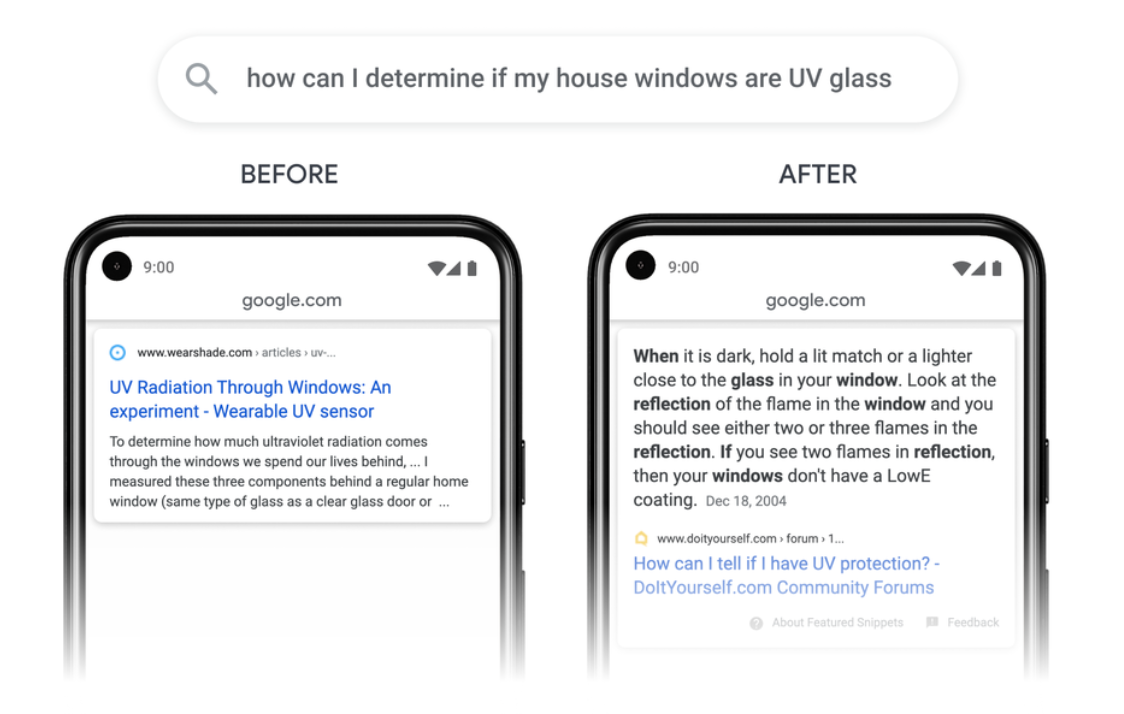 Thankfully, everyone has been asking the same question and the answer is that they’re separate systems, and should be seen as very different. Martin Splitt is a developer in the Google Search team and said, “The featured snippet will take a ‘self-contained’ answer that’s in a page and then place that into an ‘instant answer'”. In contrast, he then continued, “a passages-type result would be a page that might not necessarily give a concise answer and would be more of a ‘blue links’ type search result”. 2

Our interpretation, is that they will look very similar and serve a similar purpose in surfacing more content buried deep within web pages into Google search results, but that they are analysed and generated in very different ways.

Featured snippets continue to dominate search engine news and tensions are high of late with claims on intellectual property theft, and the fraught discussions with Australia.

The sceptics in our team suggest that there could be some correlation between this and the claims from the SEO industry that there’s been a record drop in the amount of featured snippets recently. This is timely, with the ongoing political discussions with Google stealing web owners traffic. There’s also a lot of ambiguity on whether passage ranking will replace featured snippets moving forward, with Splitt even stating he wasn’t sure how the two worked in unison.

It’s been quite a start to 2021, and like all things SEO, the situation might be wildly different tomorrow. We’ll be monitoring progress closely.

By Siobhán Swainston, Head of SEO at performance.io

Get your 30 minute consultation

If you have any questions about us, or want to reach us, please do not hesitate to contact us or send us an email.
hello@performance-io.com